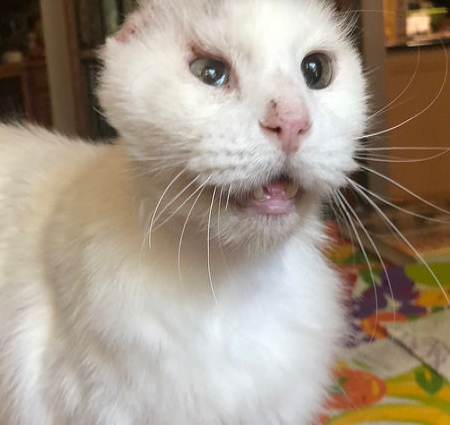 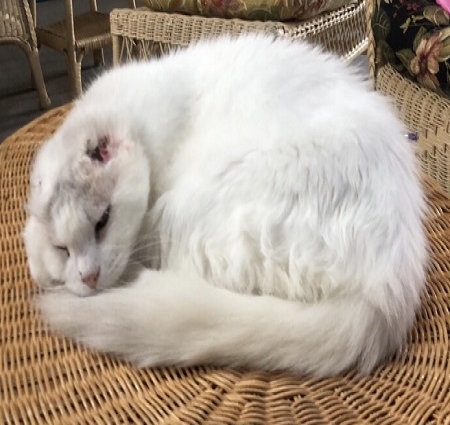 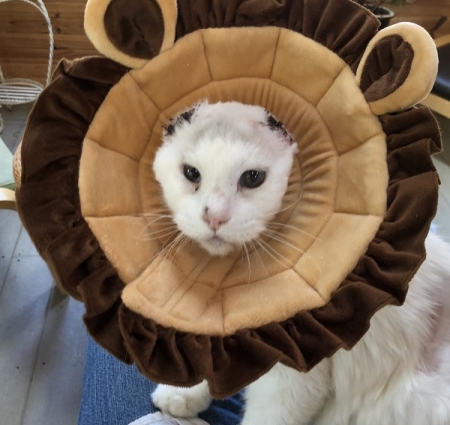 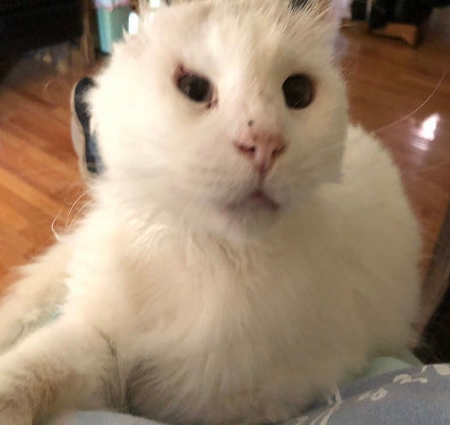 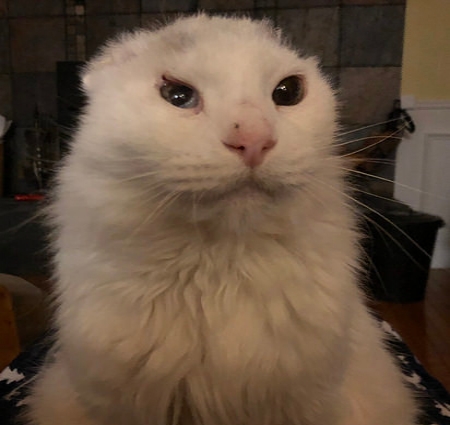 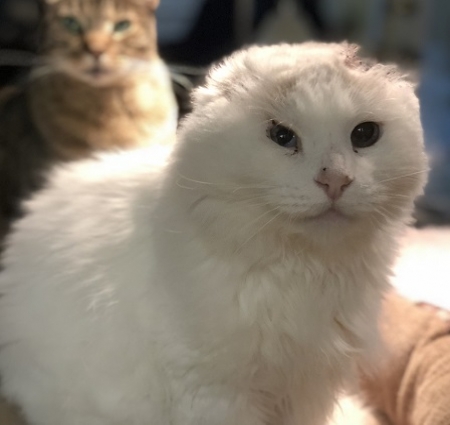 Seldom do kitties enter our sanctuary and depart so quickly, leaving a huge hole in so many hearts. Such was the case with Possum. In June of 2018, we received a call that an injured cat needed our help. A lady was feeding a group of strays on her country property and a new cat had shown up with blood dripping from his head. We sprang into action and trapped him. That's when we got a good look at him. His condition was shocking. His right ear was completely gone and his left ear was torn and necrotic. He was painfully thin. His once beautiful, long white coat was matted and dirty. But in spite of his poor condition, he was friendly. Our hearts broke for him. What was his story? No one knew.

Our vet suspected the injuries were due to an animal attack. His left ear canal was completely separated, making him deaf in that ear. His smaller right eye is likely a birth defect but he did have some vision. Surgery to remove his remaining mangled ear was scheduled for the following morning.

The surgery appeared to be successful, and after spending a few days in the hospital, Possum was sent home to continue his recovery. We couldn't wait to get him home so we could brush his coat, feed him quality food and smother him with love. We quickly discovered he was a drooler when he was happy ... and we were OK with that.

Possum continued to heal at home but not as well as we had hoped. We returned to the vet who determined more cartilage needed to be removed off both ears and a drain needed to be placed in his left ear due to a lingering infection. Tissue samples of his mangled ear were sent to the lab. After a week, we received the devastating results ... it was cancer. The vet scheduled him for another surgery to remove most of his ears along with all of the cancer.

On August 3, 2018, Possum returned to the vet for a recheck of his surgery. The vet determined he was cancer-free! We were so happy for him. He continued to recover at home and his ears were healing nicely. He was putting on much-needed weight and his fur had transformed into a soft, beautifully white coat. It was obvious that he was feeling better -- he was running and playing around the sanctuary like a furry madman! Possum continued to flourish and we were optimistic that his health issues are a thing of the past.

In early October, our sweet Possum began scratching at his left ear. It got progressively worse until he started to make it bleed. The vet confirmed his cancer had returned. We were devastated. So many people around the country followed his journey, donating towards his care, sending love and well wishes. We kept him comfortable and snuggled him close, telling him he was so loved.

When he told us he was ready, we held him as the vet helped him to gently pass. We have never stopped grieving for this boy who we couldn't ultimately save but we take comfort in helping him spend his last days in comfort, surrounded by love. We will never forget you and your adorable face, Possum. Rest in peace, sweet boy.

Watch a video of Possum.