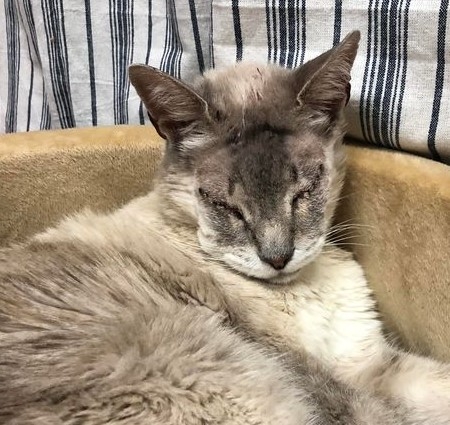 Since our mission is to help local shelters and rescues maintain their no-kill status, we were able to help the Good Shepherd Humane Society in Eureka Springs, AR with a swap in July of 2022. We had a very adoptable girl (Mia) and they had a stray blind boy, Oscar, who was having no luck getting adopted. Mia got adopted and Oscar visited our animal ophthalmologist who confirmed he was blind due to retinal degeneration. He was estimated to be 7-10 years old and extremely cranky - hence his name, Oscar the Grouch.

From experience, we know pain can cause anyone to be cranky. Our regular vet determined his mouth was a mess. Many of his teeth were rotten and he suffered from stomatitis which causes painful mouth ulcers. After a thorough dental, he was left with 3 good teeth and the change in his personality was immediate. He was much happier and calmer. There's no telling how long he'd been suffering and might've been the reason he was thrown out.

Unfortunately, a few days after his vet visit, his eyes transformed horribly overnight. Oscar had quickly developed eye ulcers caused by the bacteria Pseudomonas. It's very rare to have the bacteria in a cat's eyes. His eyes were close to rupturing and the only solution was to remove both eyeballs immediately. Since he was already blind, removing them would not impact him as much as if he were a sighted kitty.

He has recovered nicely and has taken control of the workbench in the garage area of our sanctuary. He likes to be up high and away from other cats who want to play. He's a dignified older gentleman who has no time for the shenanigans of younger cats! He loves treats and anything fishy. He's turned into a sweet old boy and we love that he can live his sunset years free of pain with a cushy life off the streets.

Want to Sponsor Oscar? Click here to become a Sponsor.